We’re four months into 2019 and we’ve seen a sharp increase in the major stock market indices with the Dow +13.45% and the S&P 500 +16.56% as of the end of April.  Participating in this type of broad-based growth as an investor can be accomplished in a handful of ways - primarily with mutual funds and exchange traded funds (ETFs).  There are distinct differences between these two investment products - and it’s not uncommon for us to receive questions on the details of how they work.

Both types of investment products - ETFs and Mutual Funds - were created from the concept of pooled fund investing.  Pooled funds bundle securities (stocks, bonds..etc) together to offer investors the benefit of diversification.  Typically, a mutual fund or ETF will hold anywhere from 100 to 3,000 different individual securities within the fund.  Diversification can help an investor manage risk and reduce volatility associated with individual stocks and bonds.  When the value of a single stock or bond drops, it has a smaller effect on the value of a diversified investment than it would if you held the stock or bond individually.  Mutual Funds became available in 1924 while ETFs first began trading in 1993 and were originally created to track an index such as the S&P 500.

While both were founded on the same basic concept of diversification, they are very different in many respects.  One major difference is that mutual funds trade through the mutual fund company or broker at the end of a trading day while an ETF trades on an exchange and is available to trade at any point during the trading day.  Mutual funds typically have higher expense ratios compared to ETFs and can carry an up-front sales load ranging from 3.75% to 5.75% if a Class-A share.  Another drawback of mutual funds is the periodic payout of capital gains distributions to the investors causing greater tax implications if held outside an IRA or 401(k).  Mutual funds offer more actively-managed portfolios than ETFs since ETFs often track an index, however actively-managed ETFs are becoming more common. 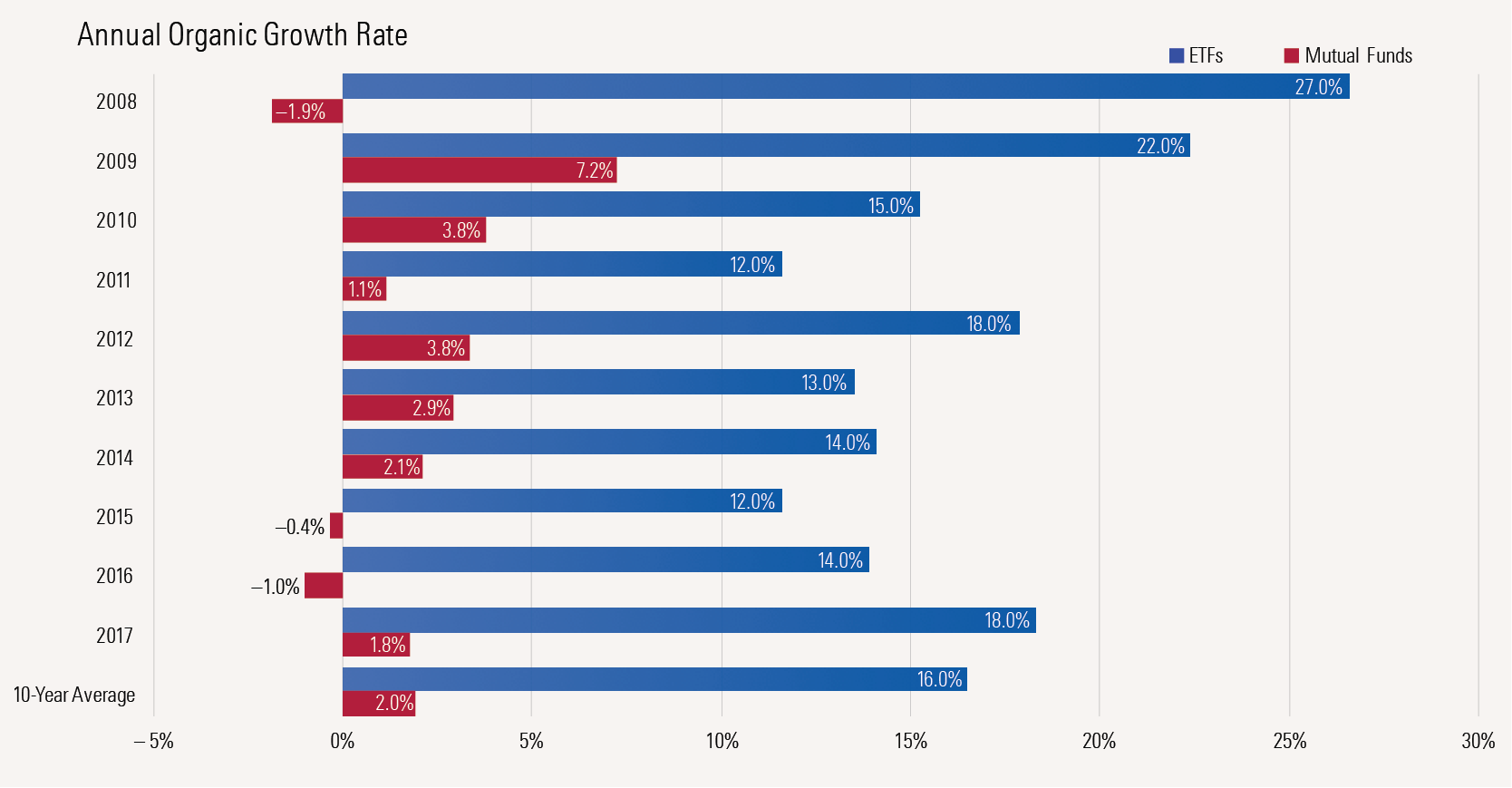 While ETFs carry some distinct advantages, mutual funds still made up about 80% of the $18 Trillion in total assets held between ETFs and mutual funds at the end of 2017.  Why is this?  First, they have been around much longer but they’re still the primary offering in most corporate retirement plans, such as 401(k) and 403(b) plans. ETFs experienced an organic growth rate of 16.5% per year over a 10-year period spreading from 2008 through 2017 while mutual funds grew at a 2% clip.  Organic growth rate does not factor in investment performance but reflects where investors are putting their new investment dollars.  As investments in ETFs  (with firms such as BlackRock and Vanguard) continue to increase, investors benefit from lower expense ratios.     In many cases, mutual fund expenses are being reduced in an attempt to be more competitive with ETFs.  We expect to see a continued shift from the use of mutual funds to ETFs due to the numerous advantages of ETFs and the focus on lower investment costs.